The 5th LINNC Americas began Friday morning at the Biltmore Hotel in Miami, Florida, USA under a beautiful sun and with a full audience in attendance. The first two presentations were of submitted cases: one was from Brazil in which Lucas Scotta Cabral showed a thrombectomy for a difficult basilar artery occlusion using two stentrievers in a Y-stenting fashion and in the second, from the United States, we heard Eytan Raz discuss situations in which anatomical variants may cause the absence of the pseudo-occlusion aspect of the internal carotid artery on vessel imaging in stroke patients. 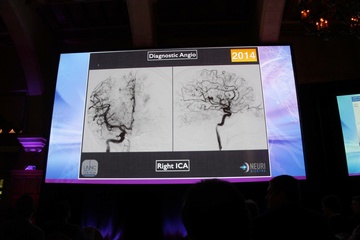 Professor Jacques Moret presented the first recorded case, a very didactic vein of Galen malformation in a paediatric patient who had developed a large neo-nidus in the posterior part of the vein of Galen due to previous inappropriate partial treatment. Complete occlusion of the nidus and the draining vein was achieved with Onyx through an arterial approach rather than a venous one since it is impossible to predict the behaviour of neovessels. The subsequent discussion about understanding the exact anatomy of the malformation reached the conclusion that it has no real importance for the treatment strategy which should be directed towards occlusion of the draining vein. In addition, Professors Jacques Moret and Alejandro Bereinstein discussed whether or not to use the “pressure cooker technique”.

The day saw two more cases of arteriovenous malformation (AVM) in adult patients, with a remnant nidus after previous incomplete treatment. Both of these patients were treated by the venous route. In the first one, with a left parietal AVM, Prof. J. Moret employed a Squidd 12 and explained the importance of arterial hyper-selective catheterisation in order to obtain a good road-map for the venous navigation.

The second patient, with a right frontal AVM that had been treated by multiple glue injections and radio-surgery four years previously, was presented by Prof. Laurent Spelle who obtained a complete occlusion of the remnant nidus in two sessions: the first from an arterial approach and the second, a venous approach with Phil. From observing these cases, we learned how to overcome the difficulty of anchoring the origin of the vein in the sinus. Globally, in well-selected patients, the venous approach seems safe.

On the topic of aneurysm treatment, Prof. Laurent Spelle demonstrated the tips and tricks for Y-stenting with laser cut stents. He did this through a recorded treatment of a recanalised ACom aneurysm after coiling, demonstrating how to deal with a difficult navigation due to a sharp angle between the A1 and A2 segment.

A second recorded case, of a recurrent initially clipped ACom aneurysm, was treated with a Pipeline flow diverter by a right radial artery approach. This allowed Prof. Erik Peterson to illustrate the technique of the radial access for diagnostic and therapeutic procedures - which seems safe overall, especially in avoiding the risk of retroperitoneal hematoma in patients under dual antiplatelet treatment.

This was followed by Pr Laurent Spelle, who spoke about how to deliver a Pipeline Flex flow diverter.

Jacques  Moret commented on another recorded case, this one concerning a wide-neck carotid artery bifurcation aneurysm treated with a WEB device. Here, Prof. Moret insisted on the importance of placing the device correctly at the neck of the aneurysm.

During this first day, several stroke cases were presented as well.

The first was a tandem occlusion managed by thrombo-aspiration, in the ICA.

Two other stroke cases were treated by a full technique using an “aspi-triver” through a balloon guiding catheter. One concerned a left M1 occlusion. The other was a wake-up stroke with a right terminal carotid artery occlusion associated with a subacute ischemia of the right upper limb due to a clot in the brachial artery. In this case, the peripheral clot was aspirated after the cerebral thrombectomy.

These stroke cases illustrate the need for adequate access to material, which must be developed, as well as the place of the MRI in patient selection.

The day’s program was completed by two industry sponsored symposiums: the first, MicroVention, concerned the evolution in the treatment of wide neck bifurcation aneurysms where the WEB device seems to be promising (present by Pr Ansaar T. Rai); the second by Medtronic was about preliminary results of the PREMIER clinical trial on Pipeline in small and medium aneurysms (Prof. Ricardo Hanel) 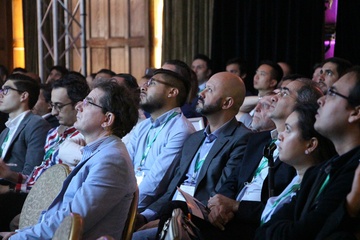 The day continued with the presentation of more selected cases by the attendees: Elias Rabahi presented a case of X stenting for a difficult ACom aneurysm; then Vitaly Kiselev showed us a case of an MCA aneurysm treated by double Barrel bypass, proximal M1 occlusion and finally by a flow diverter placement via the bypass. Stephanie Lenck demonstrated a left opercular AVM treated by a combined endovascular and microsurgical approach, which led to an interesting discussion about the best way to deal with AVMs in eloquent brain areas.

This was followed by Stephen Guerin who showed us a case a fusiform aneurysm treated by flow diverter and secondarily complicated by a stroke. The evolution was unfavourable despite mechanical thrombectomy.

Finally, Drs Boris Papon and Ansaar T. Rai presented cases of fusiform basilar artery aneurysm; a transitional fusiform aneurysm and a berry aneurysm, with unfavourable outcomes despite good anatomical treatment with flow-diverters. These last three presentations gave rise to a discussion about parent artery occlusion, a safer technique that could have avoided the thromboembolic and haemorrhagic complications seen in these presentations.