LINNC is dedicated to the open exchange of clinical knowledge and the second day of LINNC AMERICAS 2019 began with the presentation of selected cases submitted by the participants themselves. Guilherme Dabus presented a case of a difficult ruptured fusiform aneurysm of a small persistent trigeminal artery which seemed to be implicated in the vascularization of the Vth cranial nerve. This was a subject which gave rise to a lively discussion concerning the possibility of whether or not to sacrifice the parent artery, leading Prof. Jacques Moret to give us a short anatomy lesson about the vascularization of the trigeminal nerve.

This was followed by Donald Ricci, who spoke about an alternative way to treat wide neck and short height bifurcation aneurysms. Emanuele Orru presented a patient with multiple aneurysms on small vessels, in which one of the posterior communicating artery (PCOM) aneurysms was seen to bleed. The patient was treated by bilaterally placing Silk Vista Baby flow diverters inside each fetal PCOM.

Prof. Laurent Spelle presented the first recorded case of the day, a left choroidal artery aneurysm treated by reconstructing the carotid siphon with a Pipeline. This gave him the opportunity to discuss the difficulty of precisely predicting the landing zone in flow diverter placement. Matthieu Sanchez, of SIM&CURE, discussed the computer computation sizing tool SIM&SIZE which is designed to assist the operator in choosing a given device according to the desired starting and landing zone. 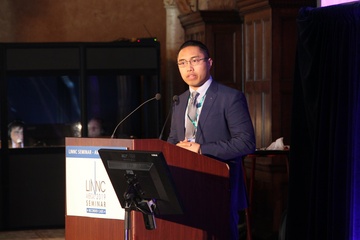 These first cases also highlighted two other critical issues: the patency of the anterior choroidal and posterior communicating arteries covered by flow diverters and intrastent intimal hyperplasia. In a recently published paper from our team by Jidaz Caroff, intimal hyperplasia was correlated to cardiovascular risk factors and to stent design but was also associated with aneurysm healing.

The second recorded case, presented by Prof. Jacques Moret, was the treatment of two small bifurcation aneurysms of the M1 and ICA on the same side with two WEBs. He reminded us of the importance of well anchoring the WEB at the neck in order to seal it and gave us an update on tips and tricks for the use of this device. Prof. Moret stressed the importance of a good vaso-CT in order to precisely check the position. Prof. Spelle reminded us that the only reasonable rescue manoeuvre for a displaced or protruding WEB after detachment is the placement of a stent, whereas balloon inflation is useless and potentially dangerous. For this reason, he recommends that we systematically premedicate patients with dual antiplatelet therapy.

Prof. Laurent Spelle then presented an interesting recorded case of an unruptured complex large ACOM aneurysm that he initially planned to treat with a WEB device, but had to change the strategy to X-stenting with Atlas stents and subsequent coiling. Despite no apparent extravasation during the procedure, the patient had a moderate subarachnoid haemorrhage (SAH) on the final XperCT.  The potential origin of this was discussed without concluding if it was related to a dissection within the Via 33 microcatheter or the lesion of a small branch where the first deployed Atlas was initially stuck.

The morning session ended with two industry-sponsored symposiums. In the first by Cerenovus, Prof. Orlando Diaz presented a series of more than sixty patients treated with a Pulse Rider device. In the second by Stryker, Sudhakar Satti shared his experience with the new AXS Vecta 74 aspiration catheter, and Shahran Derakhshani presented his series of 248 patients treated with a Surpass Flow Diverter.

The afternoon session began with a recorded stroke case of a left M1 occlusion in a patient who presented late in the emergency room and who met the DAWN and Diffuse 3 criteria. The faculty discussed the indications available through imagery in order to screen eligible patients for thrombectomy and the position of “screen less and treat more” was largely advocated. The patient’s stroke had been caused by a carotid web that was treated by angioplasty in a second procedure. 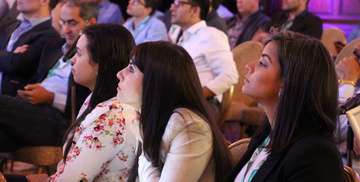 Prof. Moret presented the next recorded case, a recanalized ACOM aneurysm that he treated with an Enterprise stent from the left A1 to the left A2 and coiling from the opposite side.

Two additional recorded cases were dedicated to radial access: the first, using diagnostic angiography with a difficult anatomy of the radial artery, was commented on by Prof. Eric Peterson; the second, an incidental carotid segment aneurysm of the C2 segment was treated with a SILK flow diverter. Prof. Peterson explained the difficulty of tracking the long sheath around the tight angle at the origin of the common carotid artery. Prof. Moret commented on the deployment of the flow diverter through a double lumen Eclipse balloon, which enables systematic angioplasty in order to optimize stent apposition.

Prof. Laurent Spelle continued the afternoon presentations with two cases of ruptured ACOM aneurysms. The first patient was a 90-year-old female who was treated in emergency by a WEB device without any technical difficulties. This led to a discussion about the ethics of treating patients of advanced age. The faculty agreed that age is not in itself an exclusion criteria for endovascular treatment since outcome is correlated to the patient’s pre-treatment state. The second case was of a complex bilobated aneurysm treated by coiling using a balloon remodelling technique. 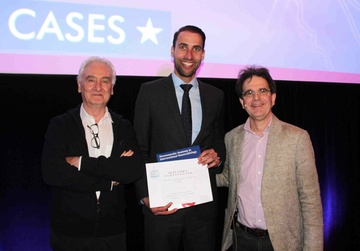 Marco Antonio Ochoa brought us a case of a direct carotid-cavernous fistula as a complication after deployment and angioplasty of a flow-diverter in the carotid siphon to treat a recanalized PCOM aneurysm.

David Volders then presented a case which received the award for the best-submitted case – the management of a balloon-induced rupture of the posterior cerebral artery during balloon remodelling for a basilar tip aneurysm.

Finally, Matthew Taon showed us the treatment of a ruptured fusiform vertebral artery aneurysm from the right radial artery route.

Prof. Jacques MORET concluded the afternoon session with a last therapeutic case, an unruptured AVM of the cerebellopontine angle causing trigeminal nevralgia. Prof. Moret completely treated this with a Phil.

….and with that, the first edition of LINNC AMERICAS came to an end.

We look forward to seeing you again in June at LINNC Paris and, of course, next year for the 2020 edition of LINNC AMERICAS!