Experience with new devices and techniques – along with unanswered questions and challenges in stroke treatment and management – were all part of the program during the last day of LINNC 2019 .

After a delightful evening spent together at the Picasso Museum with beautiful weather, we began the morning session dedicated to stroke with two interesting lectures from Brazil and the USA from Professors Francisco Mont Alverne and Adam S Arthur, respectively.

The first presentation was about the Brazilian stroke study, RESILIENT. This study demonstrated the force and weaknesses concerning the management of stroke care in this large country. This included considerations of personal transportation, a vulnerable population, delays in going to a hospital, door to needle times, results of thrombectomy, material shortages for diagnosis and treatment, etc.  The real challenge they face today is how to organize and develop the rehabilitation of patients after the stroke treatment.

It was then Prof. Arthur’s turn to explain the evolution of treatment since 1997 in the USA: the growth of technology, the importance of education and information for patients  - he showed us “FAST” an educational video. Prof. Arthur discussed the development of an application to immediately obtain after an emergency call, pictures of a stroke by phone. He underlined the importance of working together – whether in the emergency room, neurologists as well as neuroradiologists, to rapidly treat patients. 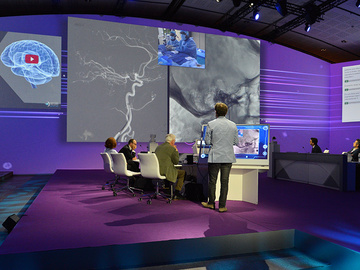 Go FAST to retrieve CLOTS was the clear message of this lecture.

The first recorded stroke case of the day was from the Kremlin Bicetre team; a wake-up stroke, an M1 occlusion. The patient was first transferred to a stroke center where a thrombectomy was performed. The thrombectomy seemed successful - TICI 3 after one passage of a stent retriever, but the clinical outcome was not as good as expected. Still, the most important point to improve outcome is the need to reduce the time between home and hospital.

It was suggested that a truck equipped with a scanner (like a medical food truck) would allow a "flying doctor” to come into the area (rather than the patient travelling) and could be a good solution for some regions.

That was the question posed to the audience on the screen of the main arena.

Do we need a new control trial to validate this question?

What do you think? 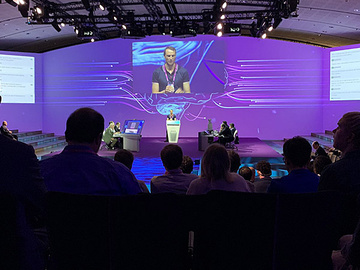 We then heard from Prof. Vincent Costalat, who spoke about the different ways to keep the carotid functional and opened. Which is the best strategy to reopen an occluded carotid? Revascularization - the use of stenting of the occluded vessel and the action of the vasa vasorum are some of the possibilities for brain revascularization.

An interesting lecture by Prof. Tudor G. Jovin concerned the use of neuroprotection in which he spoke about a recent paper dealing with the stimulation of the sphenopalatine ganglion to improve outcome in cortical strokes. This focused on the development of collaterals in the case of LVO.

The second recorded case of the day was a wake-up stroke in a 79-year-old man who received IV alteplase before being transferred to our neuroradiology department. Due to the action of thrombolysis, the clot had been pushed more distally with injection into the microcatheter with no use of a stentriever.

Prof. Jacques Moret asked the audience and the experts whether any of them would use an injection of nimodipine during the thrombectomy – with a resulting discussion about how interesting it would be to demonstrate the efficacy of arterial vasodilation after reopening a vessel.

Prof. Laurent Spelle presented the third case, what was called a “BADASS” stroke case, performed by Dr. Léon Ikka  involving a balloon catheter, an aspiration catheter and a stentriever. The success of this treatment was obtained by stenting the carotid artery stenosis despite a hemorrhagic transformation.

Should we treat all patients with LVO occlusions?

This led to a discussion where we questioned whether we should treat all patients with LVO occlusions and what was the real cost of a stroke.

Should we exclude some patients from the time window?

Some questions about stroke strategy and management still have no clear answers.

The last case from Bicetre hospital, was presented by Prof. Spelle who spoke about the importance of “tele” treatment for stroke in some poorly served locations. The technique used consists of reopening the carotid artery with a stent and inflating a balloon, and the subsequent aspiration of the clots.

The morning session ended with Prof. R. Nogueira who reviewed the different stroke studies concluding that we need to treat all patients. He recommended the balloon technique and aspiration with stent retrievers when the clot appeared hypo-intense on MRI sequences. 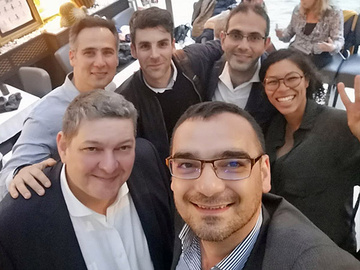 The final afternoon of LINNC 2019

After a well appreciated lunch, the afternoon session began with a series of cases that had been submitted online - the two best of these were presented on stage by their authors - Drs. Stephanie Lenck from Paris and Sibasankar Dalai from India.

LINNC 2019 came to an end with a follow-up of last year’s LINNC Paris 2018, led by Professor – and Course Director - Laurent Spelle discussing cases from Iran and Canada.

We hope you have appreciated this fantastic course during these past three days as much as we have, and hope we will be welcoming you in Paris next year for a whole new LINNC!