With 8 live cases  – 4 live cases from NEURI, The Brain Vascular Center - Bicêtre Hospital Paris Saclay University, Paris, France, 2 from the Artemis Hospital Gurgaon in New Delhi, India and another 2 from the University Health Network, University of Toronto in Toronto, Canada – LINNC Paris 2019 took off with a blast of international flavor marking this new edition!

I had the honor of giving the first lecture of the day. Entitled, “Y-Stenting + coiling vs. the WEB device in wide neck bifurcation aneurysms, a comparison based in literature”, it was a point by point confrontation based on the quality of literature, feasibility, safety, efficacy, etc. As it was an interactive session, people in the audience were asked to vote at the end of the talk to determine their first line therapy.

Results of LINNC attendants were similar to those from the twitter polls I had conducted just before we began: with 60% of the people responding favoring Y-stenting. I believe this should be understood as a promising result for the WEB, since it is not yet available everywhere.

In New Delhi, the team conducted by Dr. Vipul Gupta demonstrated the use of a FRED Flow-diverter stent for a giant cavernous aneurysm. They then treated a recurrent pericalosal aneurysm with remodeling and stent assisted coiling. Prof. Jacques Moret said that he would have chosen a low-profile flow-diverter stent, but in the discussion that followed, he spoke about how the treatments we perform should be tailored to local habits and resources.

From Bicêtre Hospital, Prof. Laurent Spelle took the opportunity of an Evolve stent case (the new flow-diverter stent from Stryker) to demonstrate all the possibilities of advanced imaging in the angiosuite. The stent size was determined after simulation with the Sim & Cure software. After deployment, the flow changes were analyzed and the MAFA was calculated using the Philips flow study software. At the end of the procedure, the final cone-beam CT scan used the new Philips butterfly technology allowing for an improved imaging quality.

In the afternoon, Pr Moret struggled with two very challenging cases. With patience and dexterity, he first performed a double stenting in a Y-configuration using Enterprise stents.

Then an MCA aneurysm was treated after a deep analysis of potential collateral flow. Combined coiling and flow-diverter stenting was used. This led to an interesting discussion among the panelists on indications for microsurgery, use of flow-diverter stents for bifurcation aneurysms, etc.

Finally, we had the chance to assist to two teaching cases from Toronto, the team managed by Profs. Krings and Pereira.

First, we saw that when planning to treat a very difficult AV Fistula you should prepare a well-defined plan A (venous access here) and a plan B (arterial access), in case you face an unexpected and difficult catheterization.

The deployment of a very long flow-diverter stent was described in a step by step fashion as these are known to be challenging in order to fully appose to the vessel wall.

That’s it for Day 1, eight more live cases scheduled on Day 2. So, stay tuned because tomorrow you might also discover the angiosuite of the future! 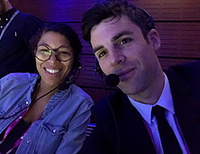