The second day’s morning session began in the very heart of Paris at the Louvre with a presentation by Adnan Siddiqui on the risk of neck remnants after endovascular treatment looking at how we can classify neck and aneurysm remnants and what to expect. 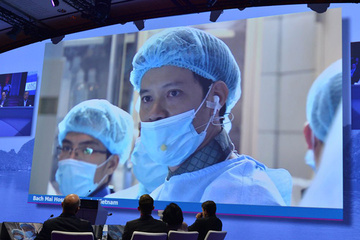 The first live case was transmitted from Hanoi, Vietnam. The treatment of a giant fusiform aneurysm of the left ICA was perform with a Surpass stent with an immediate effect on the cerebral flow.

The second live case, was presented by Jacques Moret and performed by Laurent Spelle with the team from Bicetre Hospital, Paris, France. The case concerned a 62-year-old man with a history of Acom aneurysm treated in May 2018 with a WEB device. The particular treatment this day concerned a left MCA aneurysm with a Barrel wide neck device assisted coiling. During the procedure, an unexpected coil detachment in the catheter occurred with this complication perfectly managed by Laurent Spelle. One of the main advantages of not detaching the Barrel device was illustrated by this rescue maneuver.

After the coffee break, a second live case from Hanoi was presented of a Superior sagittal sinus fistula in an 11-year-old patient. The Hanoi team used a transvenous balloon, which assured the patency of the sinus during the embolization. The SQUID progressed into the malformed network and surrounded the balloon. A very elegant conservative treatment in this young patient.

Laurent Spelle followed with a Y-stenting assisted coiling of an Acom aneurysm. The feasibility of catheter navigation through the Y was totally assured by the NeuroForm Alas stent.

After lunch, the second symposium, animated by Michel Mawad, Istan Szikora and Saleh Lamin, presented the clinical outcomes and workflow optimization using the Pipeline System and Shield technology. Mohamed Aggour has presented his experience with this new technology.

This was immediately followed with a live transmission from Toronto, Canada. This concerned a transarterial onyx embolization under balloon protection of a transverse and sigmoid sinus fistula through the stylomastoid branch of the occipital artery. The occlusion of the fistula was rapidly possible with a good management using Onyx injection.

The afternoon continued with the sixth live case of the day, live from Bicetre Hospital in France, with the treatment of a giant (3 cm) unruptured, non-thrombosed symptomatic right ICA aneurysm with Silk stent assisted coiling, after jailing. The 3D-roadmapping is a real advantage in the case of a projected giant aneurysm. The positioning of the stent was perfected following the Sim & Cure preview. 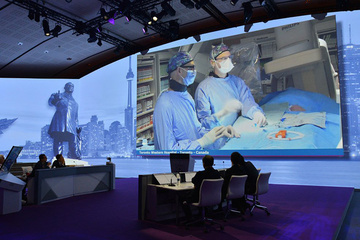 After the coffee break, we continued with a case from Toronto, Canada team, this time with a basilar tip aneurysm treated with Y stenting using Atlas stents followed by coiling using “XL Mini”. The stents were placed into the P2 segments to avoid delayed stenosis. The coil delivery was efficient and filled the aneurysmal sac in an optimal way.

Then for the last case of the day, a very complicated case of a PCom irregular aneurysm, with the PcomA arising to the neck and a hypoplasic P1 segment. The strategy chosen was to put a Pipeline Flow diverter stent as a single treatment of this aneurysm. The Sim and Cure simulation confirmed the choice concerning the size of the device, helping the operators anticipate the technical maneuvers needed to obtain a perfect stent placement. This was the opening for a very interesting Q&A session about the potential occlusion of fetal PCA after coverage with a flow diverter.

The afternoon ended with a fascinating symposium presented by Christophe Cognard (Toulouse, France) on polymer membrane technology and its applications in flow diversion which may promise some advancement in terms of safety for the endovascular treatment of aneurysms.

Conversations and shared friendships followed with a classic Parisian evening, under the flowing wings of the Vuitton Foundation in the west of Paris.