The CascadeTM Non-Occlusive Remodeling Net (Perflow Medical, Israel) is an innovative fully retrievable neck-bridging temporary support device designed for use during coil embolisation of intracranial aneurysms which allows for flow within the parent vessel while providing coverage at the neck during coiling of the aneurysm. In this article, the Cascade device was tested in vitro within a variety of aneurysm types and – after 480 attempted coilings – no evidence of coil protrusion either through the mesh wall of the device itself or any coil protrusion into the parent vessel was observed,underlining device viability and effectiveness.

While coil embolisation and endovascular approaches to intracranial aneurysms are generally considered the “gold standard of treatment”, challenges remain concerning the treatment of wide-neck aneurysms or unfavorable aspect ratios. Currently, each of the coiling techniques have possible drawbacks: stent-assisted coiling could require antiplatelet medication and thus increase the risk for patients with ruptured aneurysms, while balloon-assisted coiling can cause a “temporary cessation of anterogradeblood flow” with the potential of “drops in cerebral perfusion”. Thus, the concept of non-occlusive temporary support for coiling embolization is becoming more and more prevalent, combining the advantages of both approaches.

The CascadeTM Non-Occlusive Remodeling Net is a “next-generation temporary bridging device”, “constructed from 42 Nitinol and Platinum wires”, forming “a controllable braided net allowing for excellent visualization and good apposition to the parent vessel”. Its unique design is seen here to offer a “robust protection of the aneurysmal neck and parent vessel as well as inducing significant intra-aneurysmal flow velocity reduction (FVR)”.  As such, the Cascade device could offer “certain advantages over balloons” in assisting in the coiling of aneurysms.

In this article, the authors use in vitro silicon models to test the Cascade device in several aneurysm types, including sidewall and bifurcation aneurysms. Examining coil protrusion into the parent vessel, P. Bhogal et al looked at possible situations during intervention where coils could become “entangled with the braids of the device”, a complication which might not be seen by the operator and cause potential dislodgement of a coil “from the aneurysm during deflation and removal of the device.” After 480 attempted coilings “to determine whether coil prolapse and entanglement was possible”, the authors neither observed “a single episode of coil protrusion through the Cascade mesh, nor coil protrusion into the parent vessel when the Cascade was deployed across the neck of the aneurysms”. They noted, as well, that when the Cascade device “was positioned in one of the branches of the bifurcation aneurysm, there were no instance of coil herniation/protrusion through the device into the parent artery or either of the branches”.

Aneurysm flow assessment demonstrated a flow velocity reduction of “approximately 23% after inflation of the Cascade device”, and existing clinical data leads the authors to suggest that there appears to be no “need for intra-procedural antiplatelet medication”. While the aim of these tests was not specifically on device handling, the Cascade demonstrated easy to manipulate during the coil placement phase, which “could prove useful in vivo.” 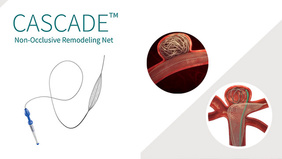 A new approach in the treatment of ruptured intracranial aneurysms 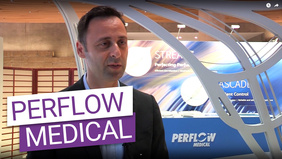 Meet Perflow: A new startup with a novel technology in “real time”