Recently, LINNC Online Editor-in-Chief, Rodrigo Rivera, spoke with the chair of Mission Thrombectomy 2020+, Dr Dileep R. Yavagal* about this initiative. What follows is a resumé of that fascinating conversation. 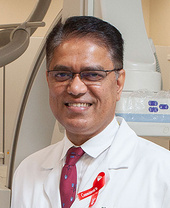 How did the Mission Thrombectomy begin?

The initiative was the culmination of discussions several of us had about creating a global approach to stroke care and especially acute stroke care. In 2015, when the results of the trials were so positive for mechanical thrombectomy, my colleagues and I, at the Society of Vascular and Interventional Neurology (SVIN) felt that, through the SVIN, we could start a campaign to create a peer network of stroke and neurointerventional experts across the six continents which would build systems of acute stroke care to accelerate access to thrombectomy. We were not sure at first whether this would work because the resources needed to run a global health campaign are quite high, but we knew that we really wanted to do it and the SVIN board approved its creation. The campaign launched in 2016.

How big is the gap in access to mechanical thrombectomy around the world?

The thrombectomy accessibility gap is quite large.

Globally, more than 97% of large vessel occlusion (LVO) patients are being left untreated. That burden is shouldered by low- and middle-income countries where, 80% of stroke burden resides and so these 80 % of all stroke patients have less than 0.5 % access to mechanical thrombectomy.

That's amazing.  How do you interact with governments in Mission Thrombectomy?

We've had very encouraging interactions with governments through our regional committees. The campaign has a core executive committee based out of the USA that is composed of 18 stroke and neurointerventional experts. The regional committees are composed of stroke and neurointerventional experts as well and include regional leaders who interact directly with their governments.

We wrote a white paper for Mission Thrombectomy 2020 that was released on World Stroke Day in 2020, called Building Thrombectomy Systems of Care in Your Region: Why and How which has now been translated into 14 languages. This document has been shared with policy makers - mainly Ministers and Ministries of Health - and has been officially endorsed by different governments. That has allowed these governments to both support and back expansion of access to thrombectomy. For example, in India, the policy paper was released in 2021 on World Stroke Day, October 29th, and 6 months later reimbursement for thrombectomy for low-income individuals increased up to two and a half times what it had been.

It's quite encouraging to see how open governments are to our message and there are plans to bring this to more health ministries around the world.

At present, what do you believe are the key limitations to developing mechanical thrombectomy worldwide?

That's such a great question because there are so many elements that are important that it’s often the case that you can't have everything work if even one of them is not present.

The approach to the problem of increasing access is based on the well-established science of treatment access in general, the three pillars of which are:

We have seen in our global survey that the most important element that determines access is the income of the particular country, which leads to the level of reimbursement and facilities, the number of operators and the number of centers per million population.

One surprising element that we hadn't anticipated is the importance of existing policies for direct triage to thrombectomy centers for suspected LVO patients, with EMS teams trained to identify LVO. 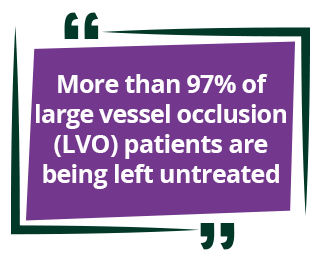 One is the workforce for thrombectomy. The training pathway has to expand. The workforce needed is huge and we are nowhere near to what we need – around 25% or less than what is required to handle the number of thrombectomies worldwide, which is estimated at 1.5 to 2 million per year.

The cost of devices is certainly a crucial piece of the puzzle, so that reimbursements around the globe can be adequately met.

Finally, education at every level, starting with ER physicians to EMS personnel to the patients themselves, and of course, policy makers.

Did the 2020 Covid-19 pandemic create difficulties or opportunities for Mission Thrombectomy?

In fact, there were major opportunities for the campaign.

The video conferencing revolution allowed us to keep in touch with all the regional committees whenever we wanted because people were simply more available as they had stopped travelling!

However, this only represents part of the growth, because the committees now have to do the local work, still we are thankful that this period turned out to be so positive for the evolution of the campaign.

What role will technology play in the future development of Mission Thrombectomy?

There are a couple of technological developments that could increase, even accelerate, access to thrombectomy.

Mission Thrombectomy 2020 is starting a tele-observership program that allows early career interventionists to gain more experience with thrombectomy without having to travel to the USA or Europe. We will have them observe and then maybe proctor a few thrombectomies at the end of their observership. This approach could then be expanded to regional systems where more experienced thrombectomy experts can guide or be consulted by less experienced ones, even in the middle of tough thrombectomy cases. Overall, this would raise the quality of our services.

The other big technological development that we are all very excited about is, of course, robotic thrombectomy. We don’t know if will be ready in 2, 5 or 10 years in the future, but it could be transformative.

Which continent or region has the biggest gap in offering mechanical thrombectomy today and where could Mission Thrombectomy have the biggest impact?

We all know how underserved Africa is and the burden of stroke there is enormous. Specifically, it is sub-Saharan Africa that is least served by advanced treatments which include mechanical thrombectomy.

Asia and Latin America also have big gaps, but even the USA, Europe, Australia and Japan have them. Australia has the highest access rate which is only 46%, but it is a big accomplishment which they should be commended for. Still, for that one person who doesn't get a thrombectomy when she could have benefited from it, for that one person it is a 100% loss.

So, I think our goal should be to get as close to 100% access as we can, as quickly as we can. I know it’s a bit of a fantasy, but for those of us who do this every day, who understand and have seen how beneficial this procedure is, anything we can do to improve access is worthwhile.

What are the other goals of Mission Thrombectomy?

In order to achieve our goal of rapidly increasing mechanical thrombectomy access, we need to double the numbers of thrombectomies in a given region every two years. This is a simple, or even simplistic, metric, but it is something that is relatively easy to aim for. It gets harder when you do thousands of thrombectomies, but because the access rate is so low in the vast majority of the world, it's easier to go from 10 to 20 to 40 thrombectomies than to say: you have to increase by 50%.

In regions such as the USA, where around 40,000 thrombectomies are performed each year, to raise that number to 80,000 in two years is a lot to ask for. But that’s where the resources of an advanced country’s healthcare system come in to play.

Our next goals are to develop highly impactful public health interventions in every region to help move this process along. For example, despite efforts over the last few decades, the public knowledge of how to recognize a stroke and act on it is still very, very low. So, our goal is to keep using public health interventions, advocating with governments, and educating stakeholders on a continuous basis in order to increase access to mechanical thrombectomy.

How do you see the future long-term mission of Mechanical Thrombectomy 2020?

It’s hard to predict, but we've been very fortunate to have the partnership of 90 regions.

People have really come together around this mission, which is such a blessing, and we want to continue until 2030 if the funding and we still have the approval of the SVIN board.

We know that to even achieve 50% access normally takes 30 to 40 years and our goal is to get as close as possible to 50% access by 2030. We hope everyone who’s reading this participates and brings their talents, effort and resources to achieve these goals.

We’ve discussed politics, training and budgets and now, from your experience in research, what role will research play in the development of mechanical thrombectomy?

My own research at the University of Miami focuses on clinical trials of thrombectomy and the intraarterial delivery of stem cells for stroke recovery. The approach is to give stem cells intraarterially at about 24 to 48 hours. With Sean Savitz, from the University of Texas, in Houston, we’ve done one randomized trial of autologous cells and showed it to be safe in 48 patients. We are quite close to doing a much larger study, in about 250 patients, to show early efficacy of this procedure that could transform our ability to enable stroke patients to be independent at 90 days or 6 months. I think the future is really promising and exciting for offering better outcomes to our stroke patients than ever before, and research is the key to achieve this. I feel very privileged to be part of this journey along with everyone else who is involved in it.

I think that, in our field, the power of friendship and partnership is quite incredible and we can achieve so much more together than as individual practitioners. For example, you came from Chile to interview me in Miami and we’ve talked about working together. It is this spirit that drives me and I think it is energizing for us all and I hope that these partnerships and collective work will continue to grow.

RETURN TO THE STROKE SPECIAL REPORT