Home >The Big Apple at the center of the endovascular universe

The Big Apple at the center of the endovascular universe 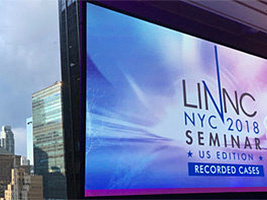 Day one of the LINNC New York Seminar. This is the fourth edition of our two days seminar dedicated to a variety endovascular neurointerventional cases, recorded at the Bicêtre Paris Sud Hospital.

Pr. J. Moret and Pr. L. Spelle began by welcoming the 200 participants most of whom come from North and South America before introducing the faculty and scientific committee and beginning the animated debates.

The program started with the presentation of the best cases submitted by attendees. The first two cases were presented to the attendees: one was from the Yale Neurosurgery Department (B. Cord) and focused on the value of the aneurysm wall enhancement in MRI to help depict a ruptured aneurysm in cases of multiple aneurysms; the second, presented by R. Rivera, looked at spontaneous M1 symptomatic acute dissections with a debate on stenting.

The recorded cases started with a first case presented by Pr. J. Moret concerning a vein of Galien aneurysmal dilatation in a child, with a nice discussion led by the NY based Pr. A. Berenstein about the precise nosology of this malformation and illustrating the technical benefit of using a detachable catheter for glue embolisation in these high flow fistula. 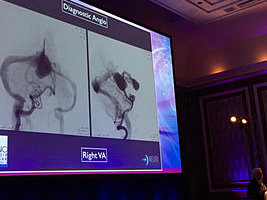 The second pre-recorded case, presented by Pr. L. Spelle, concerned an arteriovenous malformation, with Onyx embolisation; the modalities of the venous and arterial approaches to nidus filling were discussed.

This was followed by the presentation of a case of thrombectomy of a stroke related to an M1 occlusion, using a stent retriever with a rapid TICI 3. The femoral extravasation related to the initial groin puncture was treated by transarterial selective extraluminal embolisation. 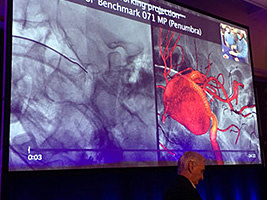 The indication of a giant cavernous aneurysm revealed by trigeminal neuralgia was then debated. Its treatment consisted of stenting with a Leo associated to a double flow diverter of the stenosis proximal to the aneurysm and then covered by the stenting which is difficult to treat and required a high pressure angioplasty balloon.

The angio-anatomy of basilar tip perforators was then “honored” by a very nice anterior pontine artery distinct from the basilar tip microaneurysm treated by a Web device. The recorded sequence illustrated very well the problematic of stability concerning the tip of the microcatheter is this type of configuration. 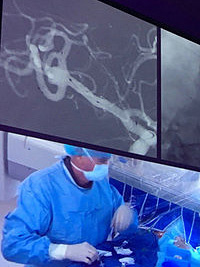 Ending the morning, an industry sponsored symposium from Microvention discussed the LVIS stent and the Hydrosoft coils.

The afternoon saw the second industry sponsored symposium in which Medtronic presented their Phenom family of microcatheters. 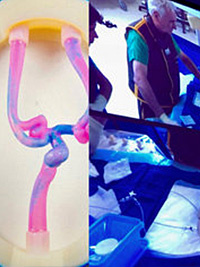 The pre-recorded cases began again, with a thrombectomy performed using the Aspitriever technique. The possibility of using an additional proximal balloon in a larger catheter – not seen in this case – was also debated with Pr. L. Spelle.

The seventh case of the day concerned Y stenting, with Pr. J. Moret reminding us that this is rare and the technical modalities are finally very diverse. We then saw another case, but when we heard the operator saying “the web has disappeared” the room filled with laughter with the wide neck MCA bifurcation finally treated by the “Remo-Stent” technique, associating first balloon remodeling coiling and then stenting.

The afternoon continued with another of the four best cases submitted by attendees and then concluded with Pr. J. Moret presenting an in vitro simulation using a Biomodex silicon model produced from 3D angiography of a patient with an MCA bifurcation aneurysm. This was used to test the different technical modalities as well as to train the operator in very personalized conditions before a difficult case all of which is a definite added value. There is a strong possibility that this approach to complex interventions could be applied in the future in our hospital practice.

And now….on to the second day !